Arrange Points by Dragging Them

iTopography has a really remarkable tool of arranging the points by dragging them. This tools is available only when we enter the distance between two point, and the angle between three points. While we drag these points, iTopography computes the distance and the angle that are needed to draw this new shape. Thus, when we go back to the Points screen we see the computed distances, and angles for the points that we have dragged. This means, that we can design a fairly complicate shape by starting from a simple one. iTopography will do all the hard work for us.

We chose this symbol for two reasons:

1. It is a well known symbol

2. It looks like a star, it is not a complicate symbol, and thus, we can easily demonstrate this feature

We create a new project, and we select to use the feature to create a regular hexagon. We have the following list of points and drawing. 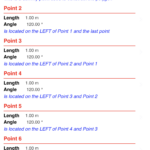 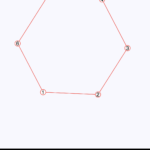 Even though we do not touch three points, the distances and angles of all points will be affected. This is because a point location on the canvas is affected by the position of its neighbor points

We end up with the following two drawings: 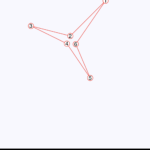 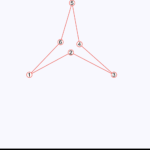 While we move the vertices we may see the following error message (switch to the Points section, and then back to the Map section) : 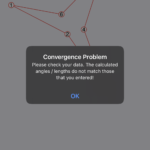 This convergence error indicates that iTopography’s algorithm was not able to compute the position of all the points based on the given angles and lengths. We may see this error message even though the drawing in the Map section is a good one. In that case, simple ignore the message. Otherwise, move a few points around so that you get a good drawing. Always, after you finished dragging the vertices, switch to the Points section, and then back to the Map section so that iTopography’s algorithm will compute the new drawing based on the new angles and lengths.

We close this article by giving the angles and lengths that are needed to draw the Mercedes-Benz symbol: 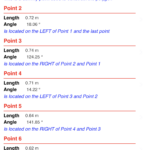 We started from a regular hexagon, and we created the Mercedes-Benz symbol by dragging some of the vertices around. We then rotate it, and zoom in on it so that it is centered in the screen.