Enter Distance/Length and Angle Between Points

This is the most difficult way to enter the points, because now we have to measure the distance between two adjacent points, and the angle that is created between three adjacent points (the 2nd point is the vertex of the angle). But, it is also the most accurate method, and it is the only method that we can use when we want to calculate the surface of a small area or solve a geometrical problem!

As with the other two methods, the first thing that we need to do is to enable it in the Settings screen. This is relative easy, as it requires to disable both the GPS device and Entering the Longitude/Latitude of the points. 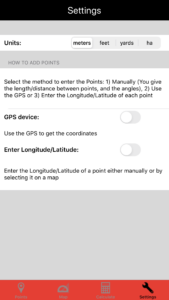 Next we go to the “Points” screen to start adding the points. Here, we notice two buttons in the top right corner: The “compass” button and the “+” button.

iTopography is equipped with a nice tool to automatically create a regular polygon with as many vertices as we like. For that, we click on the “compass” button, and we then enter the number of vertices and the length of each side. 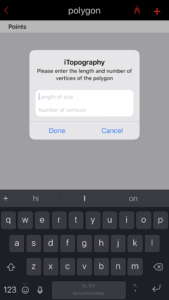 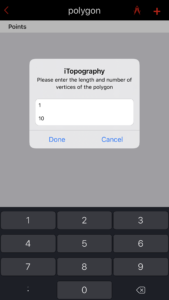 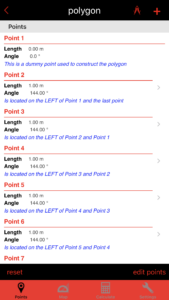 We decided to create a regular decagon. When we click on the “Done” button, iTopography added the points that we need to create that polygon.

As we see in the list of points for a regular decagon, the first point is a dummy point. This means that it does not matter which point we mark as point 1 of the area that we are interested in. The second point is located on the left of the first and last point, and the distance between that point and the 1st point is 1m. This means that if we were inside the decagon, and we were walking from the last point towards the first point, we would meet the second point on the left hand side. Thus, when we would arrive at the 1st we would turn left for 144o and walk for 1m until we meet the 2nd point. We repeat this process for the other points. Not, hard, right?

Enter distance/length and angle for each point

Unfortunately, most shapes are not regular polygons, and thus we need to manually enter the distance/length between the points and the angles. This can be cumbersome as we now need to measure each distance/length and each angle separately, but, iTopography has a complex algorithm that allows us to skip few angles.

We demo this case by solving the 3rd problem from the site https://www.analyzemath.com/high_school_math/grade_10/geometry.html which has geometrical problems for the 10th grade. In the next screenshot we depict the shape whose area we want to calculate. Note, that we have numbered the 4 corners. 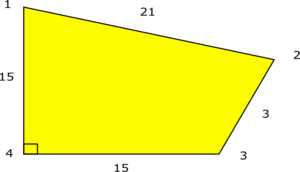 Next, we start the iTopography app, and in the “Points” screen we select iTopography to compute the angles. For the 1st we entered the length to be 15m, and the angle to be 90o (right angle). For the other three points, we only give their distance/length. We end up with the following list of points: 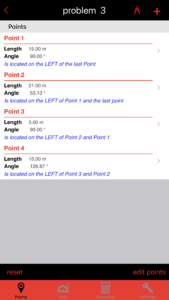 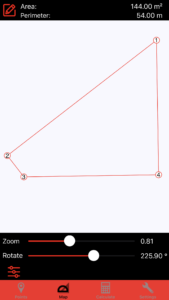 We end this example, with one more nice feature. We go to the “Calculate” screen, and we click on the notepad button, the one in the top right corner. In the new screen we see the distance between each point and the angle of each vertex. 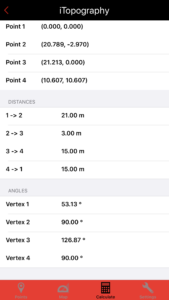 Now, we will try to compute the surface of the following area. In this problem, all angles and all distances are known. Note, that each corner is numbered. 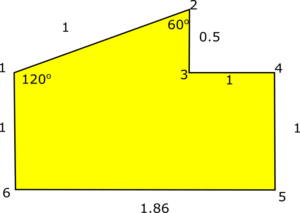 We click on the “+” button, and we select that we will enter all angles. As with the regular polygon, the first point is a dummy point. We click again on the “+” to enter the 2nd point. This point, is located on the right of point 1, the distance is 1m, and the angle is 120o. Similarly, the 3rd is on the right of the 2nd point, 0.5 m away, and the angle is 60o. The 4th point is a little bit tricky, as it is located on the left of the 3rd point. We keep repeating this process until we add all 6 points. In the next screenshots we see the list of points, the drawing, and the computed angle for all vertices. 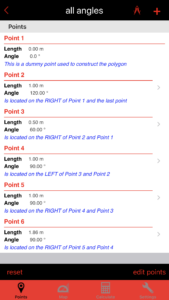 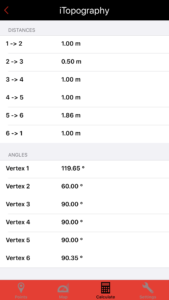 In the last screenshot we note that the angles for a few vertices are not equal to the ones we provided in the 1st screenshot. On the other hand, the distances are the same. This is because we made a small mistake when we measured the distance between the points. The correct distance between point 5 and 6 is 1.866m, and not 1.86, If we modify the length for point 6, and set it to 1.866m, the angles are the one we provided, as we see in the next two screenshots. 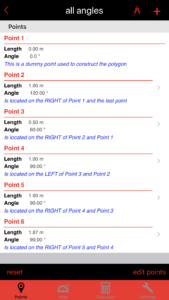 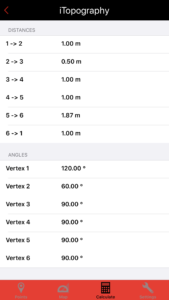 Even though in the list of points we see the value of 1.87m, if we tap on that row, in the dialog we see the correct value, i.e. 1.866m. This is because iTopography is rounding the values to two decimals. Note, that when we had given the “wrong” value of 1.86m, iTopography was still able to draw the area, and compute its surface by modifying the angle of a few points. This is the power of the iTopography application!

In this article we described how to manually enter the distance/length between points and the angle at each vertex. This is certainly cumbersome as it requires to measure each distance and each angle. But, iTopography is an extremely powerful application, and it has some really nice features: